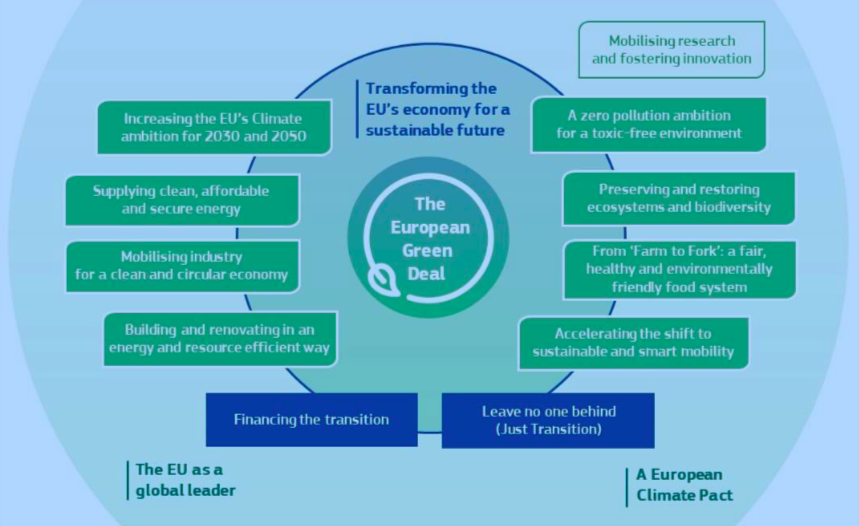 Yesterday the European Commission President Ursula von der Leyen launchds her effort to upend just about every policy area in the EU to make the bloc climate neutral by 2050.

The Commission published its communication /1/ on the Green Deal, aling with an annex listing dozens of policies meant to turn the strategy into reality, and their expected timing.

The Green Deal is “a new growth strategy that aims to transform the EU into a fair and prosperous society, with a modern, resource-efficient and competitive economy where there are no net emissions of greenhouse gases in 2050 and where economic growth is decoupled from resource use,” according to the communication.

The document presents an initial roadmap of the key policies and measures needed to achieve the European Green Deal. It will be updated as needs evolve and the policy responses are formulated.”

The annex to the communication outlines the timelines for all the policy measures, including some coming as soon as January, such as a Just Transition Mechanism and a Sustainable Europe Investment Plan.

Computer Science will play a crucial role in this strategy. It needs to be carefully reviewed because computer science might cause problems and solutions at the same tome to implement the European Green Deal. The document mentions computer science in two areas:

Digital technologies are a critical enabler for attaining the sustainability goals of the Green deal in many different sectors. The Commission will explore measures to ensure that digital technologies such as artificial intelligence, 5G, cloud and edge computing and the internet of things can accelerate and maximise the impact of policies to deal with climate change and protect the environment. Digitalisation also presents new opportunities for distance monitoring of air and water pollution, or for monitoring and optimising how energy and natural resources are used. At the same time, Europe needs a digital sector that puts sustainability at its heart. The Commission will also consider measures to improve the energy efficiency and circular economy performance of the sector itself, from broadband networks to data centres and ICT devices. The Commission will assess the need for more transparency on the environmental impact of electronic communication services, more stringent measures when deploying new networks and the benefits of supporting ‘take-back’ schemes to incentivise people to return their unwanted devices such as mobile phones, tablets and chargers.

Accessible and interoperable data are at the heart of data-driven innovation. This data, combined with digital infrastructure (e.g. supercomputers, cloud, ultra-fast networks) and artificial intelligence solutions, facilitate evidence-based decisions and expand the capacity to understand and tackle environmental challenges. The Commission will support work to unlock the full benefits of the digital transformation to support the ecological transition. An immediate priority will be to boost the EU’s ability to predict and manage environmental disasters. To do this, the Commission will bring together European scientific and industrial excellence to develop a very high precision digital model of the Earth.