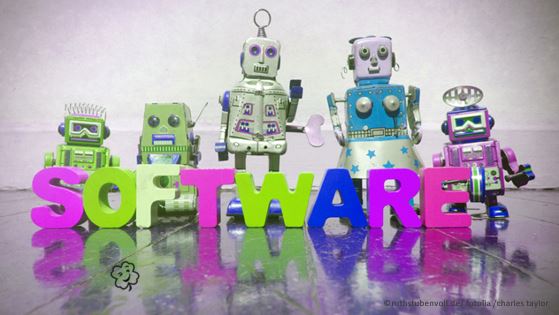 As a newcomer to the IT industry – especially with a philosophical and theological academic education – I was amazed already 20 years ago, about the many doctrines that I met in talks with the new colleagues. One believed “Microsoft alone is the future”, while the other spoke only of “micro-scrap” and even then believed in “Linux alone”. Some promised salvation from the mainframe, others from client-server solutions. Surprisingly, the question of what the revered tool is best for was subordinated.

Although no-one wanted to admit and even today does not want that many IT statements are beliefs, the usage of the language reveals more. Technological evangelists – even if they do not call themselves that of course – announce good news. The εύαγγέλιον (euangelion) is known by the theologian as “good news” and thus combines a perspective on salvation in a world beyond higher order. So what do we hope for salvation from the messages of these evangelists?

Automation in any form has begun with the aim of making people’s physical and mental work easier. Much of it has succeeded. But now we are obviously at a crossroads where activities of machines

In the Silicon Valley, the first AI church was introduced some time ago. A formerly serious IT expert founded the “Way of the Future,” as the dean of which he calls himself and who adores an artificial intelligence as a deity. Critical scholars of religion always ask the question of how far each religion grows solely in the imagination of the human mind. Long lists of pros and cons are used in the field. In any case, it is true that we can describe all transcendence only with the means of human language and thus inadequate.

In the case of the AI Church, man is the creator of the deity. Apparently, the “Way of the Future” does what others predict as the autonomous assumption of artificial intelligence over man. Before the machines bring themselves into the appropriate position, people prefer to create their deity themselves here.

In earlier times, devout people went to a church from time to time during the day to pause for a moment. Technology devotees are making a pilgrimage to Apple Stores. Other believers turn to car dealerships or similar luxury stores. But that’s not our topic.

Looking at the first-day sale of iPhones of a new generation, the queues in front of the corresponding shops remind the theologically educated to Psalm verse, “I wait for the Lord more than watchmen for the morning … and with him is plentiful redemption” (Ps 130 verse 6-8). The door opener of the store is expected like a Messiah.

Interiors of Apple Stores are sumptuous stagings. Comparing the presentation of devices with tabernacles is not so far-fetched. And if you’ve ever looked into the face of a shopper who first purchased the latest smartphone on Appearance Day, you get a sense of mystical rapture or the liberating power of medieval indulgence letters.

A look behind the scenes

Is the description of technical things, apparatus and software with a religiously colored language really a religion? Are the borrowings of performances and presentations that have worked for centuries, religion?

In my view, these are all just clever marketing moves. Patterns that have been tried and tested for centuries are used to bind one’s own followers. There are many methods for this: some stand for baroque splendor and like to indulge in luxury. The others prefer individuality and independence and follow the frugal penguin.

Of course, not every technology user is religiously ambitious. But the mechanisms of believing submission are unmistakable in many developments. But what happens when one expects salvation from dead technology? Have religions in the past created a peaceful coexistence? Rather not. Have unreflected, possibly radicalized adherents of religions ever advanced humanity?

One more thing: As a person who works with language for about 40 years I know that serious thoughts and important texts should be written and published in ones native language. This text is a translation of the former published “Erlösung durch Maschinen?” in this blog.
Special thanks to Gerhard Schimpf for his great help to translate the text.